skip to main | skip to sidebar

Well, it's got to be better than the old year for some of us. Between our personal retirement losses and the at-large economic anxiety, 2008 is best left behind. The new year promises great opportunity with what promises to be an historic presidency and a renewed emphasis on timeless virtues. Whether our attention deficit society can sustain living within our means and without high drama is a question for another day.

The new years traditionally brings with it a renewed attention to personal growth in the form of the ubiquitous "New Years' Resolutions"... and as always, I'm game. Once again I'll try to lose the 50 pounds I've put on since my headship began and my marathoning career ended (not coincidentally at the same time). As with so many things, self-discipline is the key. I've begun a personal photo-a-day project which will hopefully appear from time to time here, another exercise in self-discipline. Is there a theme here? 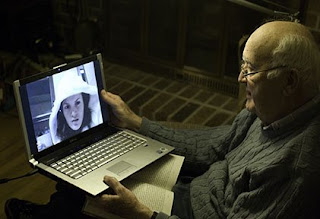 My first photo of the year is posted here. It captures for me the essence of 2008 for my family, the loss of my mother to a heart attack and my daughter to college. This was taken New Year's Day evening, after we took Christina back to Dickinson, where the women's basketball team was beginning practice again. We checked in with her later that night via Skype, which allows us to videoconference with her from her dorm room. Here, my father, alone for his first holiday season in 52 years, is chatting with her from our family room. What a world we live in! Like fish surrounded by water, we are largely oblivious to the change we are living through. Dad's father was born 24 years after Abraham Lincoln was assassinated. What will world be like when Christina is 82 and tells her grandchildren that her father was born 12 years after World War II? Will it seem like as much of a throwback? And by what means will she tell them?
Posted by Dave at 3:44 PM

Keep Up With Dave's Blog

Promote Your Page Too